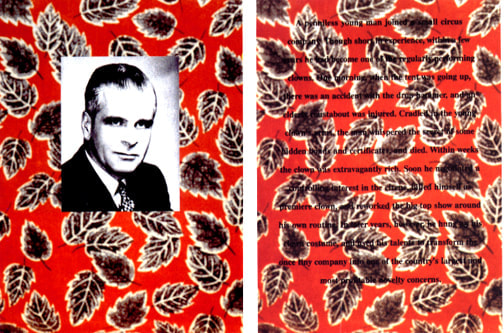 A penniless young man joined a small circus company. Though short in experience, within a few years he had become one of the regularly performing clowns.  One morning, when the tent was going up, there was an accident with the drop hammer, and an elderly roustabout was injured.  Cradled in the young clown's arms, the man whispered the secret of some hidden bonds and certificates, and died.  Within weeks the clown was extravagantly rich.  Soon he negotiated a controling interest in the circus, billed himself as premiere clown, and reworked the big top show around his own routine.  In later years, however, he hung up his clown costume, and used his talents to transform the once tiny company into one of the country's largest and most profitable novelty concerns. 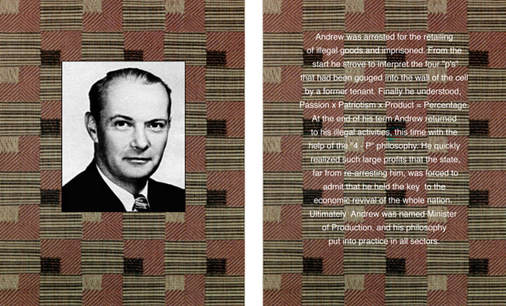 Andrew was arrested for the retailing of illegal goods and imprisoned.  From the start he strove to interpret the four p's that had been gouged into the wall of the cell by a former tenant.  Finally he understood, "Passion x Patriotism x Product = Percentage.  At the end of his term Andrew returned to his illegal activities, this time with the helpl of the 4-P philosophy.  He quickly realized such large profits that the state, far from re-arresting him, was forced to admit that he held the key to the economic revival of the whole nation. Ultimately Andrew was named Minister of Production, and his philosophy was put into practice in all sectors. 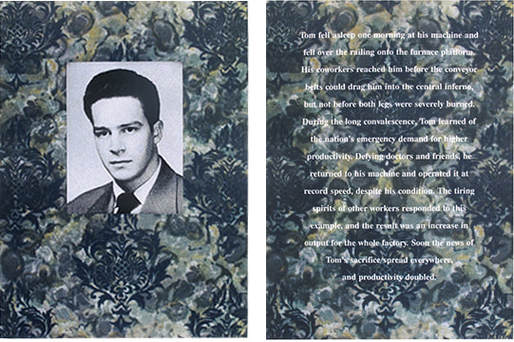 Tom fell asleep one morning at his machine and fell over the railing onto the furnace platform. His coworkers reached him before the conveyor belts could drag hm into the central inferno, but not before both his legs were severely burned. During the long convalescence, Tom learned of the nation's emergency demand for higher productivity.  Defying doctors and friends, he returned to his machine and operated it at record speed despite his condition. The tiring spirits of other workers responded to this example, and the result was an increase in output for the whole factory. Soon the news of Tom's sacrifice spread everywhere and productivity doubled. 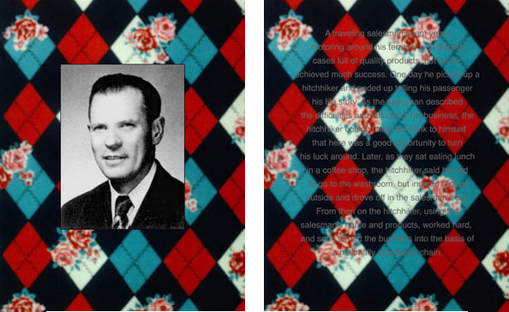 A travelling salesman spent years motoring around his territory with display cases ful of quality prodeucts, but never achieved much success.  One day he picked up a hitchhiker and ended up telling his passenger his life story.  As the salesman described the difficulties and failures of his business, the hitchhiker couldnt help but think to himself that here was a good opportunity to turn his luck around. Later, as they sat eating lunch in a coffee shop, the hitchhiker said he had to go to the washroom, but instead slipped outside and drove off in the salesman's car. From then on the hitchhiker, using the salesman's name and products, worked hard, and soon turned the business into the basis of a nationally successful chain. 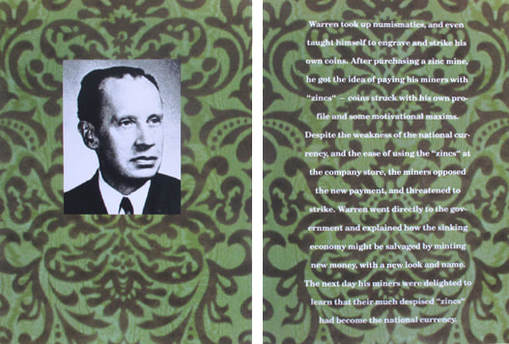 Warren took up numismatics, and even taught himself to engrave and strike his own coins. After purchasing a zinc mine, he got the idea of paying his miners with "zincs" — coins struck with his own profile and some motivational maxims. Despite the weakness of the national currency, and the ease of using the "zincs" at the company store, the miners opposed the new payment, and threatened to strike. Warren went directly to the government and explained how the sinking economy might be salvaged by minting new money, with a new look and name. The next day his miners were delighted to learn that their much despited "zincs" had become the national currency.