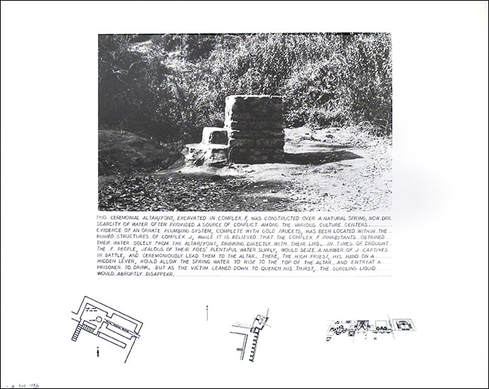 This ceremonial altar/font, excavated in Complex F, was constructed over a natural spring, now dry.  Scarcity of water often provided a source of conflict among the various culture centers.  Evidence of an ornate plumbing system, complete with gold faucets, has been located within the ruined structures of Complex J, while it is believed that the Complex F inhabitants obtained their water solely from the altar/font, drinking directly with their lips.  In times of drought, the F people, jealous of their foes' plentiful water supply, would seize a number of J captives in battle, and ceremoniously lead them to the altar.  There, the high priest, his hand on a hidden lever, would allow the spring water to rise to the top of the altar, and entreat the prisoner to drink, but as the victim repeatedly leaned down to quench his thirst, the gurgling liquid would abruptly disappear. 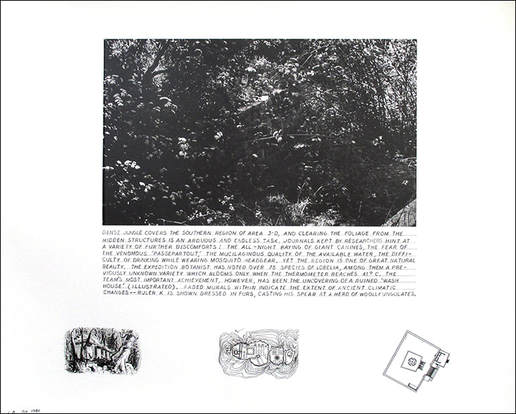 Dense jungle covers the southern region of Area 3-D, and clearing the foliage from the hidden structures is an arduous and endless task. Journals kept by researchers hint at a variety of further discomforts: the all-night baying of giant canines, the fear of the venomous "passepartout," the mucilaginous quality of the available water, the difficulty of drinking while wearing mosquito headgear.  Yet the region is one of great natural beauty. The expedition botanist has noted over 75 species of lobelia, among them a previously unknown variety which blooms only when the thermometer reaches 41 degrees C. The team's most important achievement, however, has been the uncovering of a ruined "wash house" (illustrated). Faded murals within indicate the extent of ancient climatic changes—Ruler K is shown dressed in furs, casting his spear at a herd of woolly ungulates. 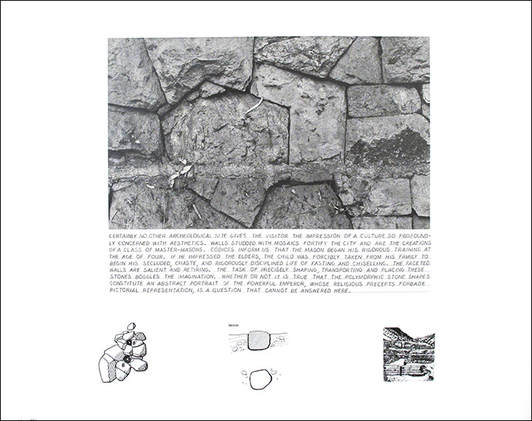 Certainly no other archeological site gives the visitor the impression of a culture so profoundly concerned with aesthetics. Walls studded with mosaics fortify the city and are the creations of a class of master-masons. Codices inform us that the mason began his rigorous training at the age of four. If he impressed the elders, the child was forcibly taken from his family to begin his secluded,chaste, and rigorously disciplined life of fasting and chiseling. The faceted walls, the legacy of this professional class are salient and retiring. The task of precisely shaping, transporting, and placing these stones boggles the imagination. Whether or not it is true that the polymorphic stone shapes constitute an abstract portrait of the emperor, whose religious precepts forbade pictorial representation, is a question that cannot be answered here. 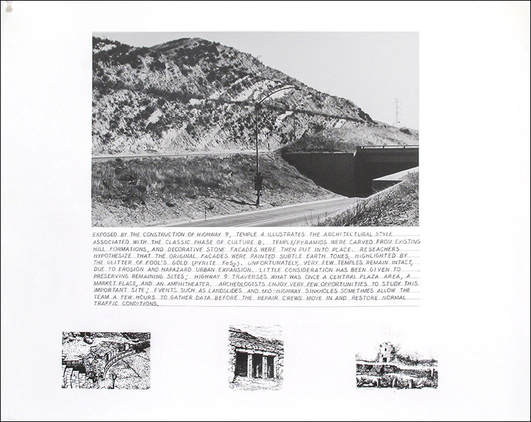 Exposed by the construction of Highway 9, Temple 4 illustrates the architectural style associated with the classic phase of Culture B. Temple/pyramids were carved from existing hill formations, and decorative stone facades were then put into place. Researchers hypothesize that the original facades were painted subtle earth tones, highlighted by the glitter of fool's gold (Pyrite FeS2). Unfortunately, very few temples remain intact, due to the erosion and haphazard urban expansion. Little conservation has been given to the preserving of remaining sites; Highway 9 traverses what was once a central plaza area, a marketplace, and an amphitheater. Archeologists enjoy very few opportunities to study this important site; events such as landslides and mid-highway sinkholes sometimes allow the team a few hours to gather data before the repair crews move in and restore the normal traffic conditions. 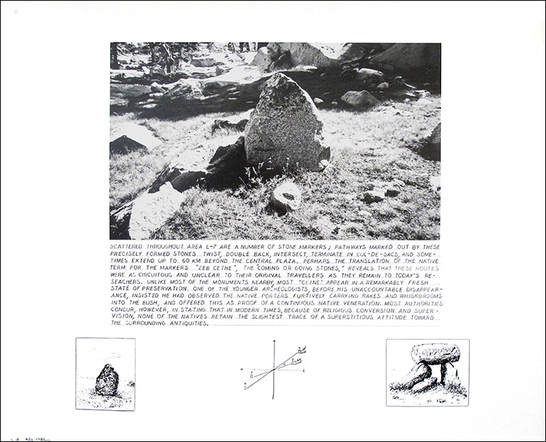 Scattered throughout Area L-7 are a number of stone markers: pathways marked out by these precisely formed stones twist, double back, intersect, terminate in cul-de-sacs, and sometimes extend up to 60km beyond the central plaza. Perhaps the translation of the native term for the markers, —zeb cetne— the "coming or going stones" reveals that these routes were as circuitous and unclear to their original travelers as they remain to today's researchers. Unlike most of the monuments nearby, most "cetne" appear in a remarkable fresh state of preservation. One of the younger archeologists, before his unaccountable disappearance, insisted he had observed the native porters furtively carrying rakes and whisk-brooms into the bush, and offered this as proof of a continuous native veneration. Most authorities concur, howeve3r, in stating that in modern times because of religious conversion and supervision none of the natives retain the slightest trace of a superstitious attitude toward the surrounding antiquities. 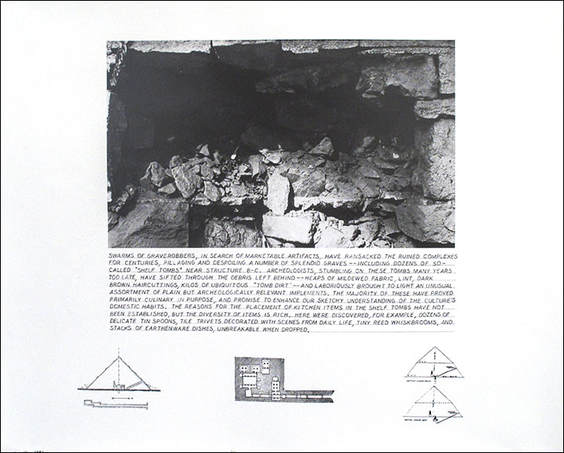 Swarms of grave robbers, in search of marketable artifacts, have ransacked the ruined complexes for centuries, pillaging and despoiling a number of splendid graves—including dozens of so-called "shelf tombs" near structure B-C. Archeologists, stumbling on these tombs many years too late, have sifted through the debris left behind—heaps of mildewed fabric, lint, dark brown hair-cuttings, kilos of ubiquitous "tomb dirt"— and laboriously brought to light an unusual assortment of plain but archeologically relevant implements. The majority of these have proved primarily culinary in purpose, and promise to enhance our sketchy understanding of the culture's domestic habits. The reasons for the placement of the kitchen items in the shelf tombs have not been established, but the diversity of items is rich. Here were discovered, for example, dozens of delicate tin spoons, tile trivets decorated with scenes from daily life, tiny reed whisk brooms, and stacks of earthenware dishes, unbreakable when dropped. 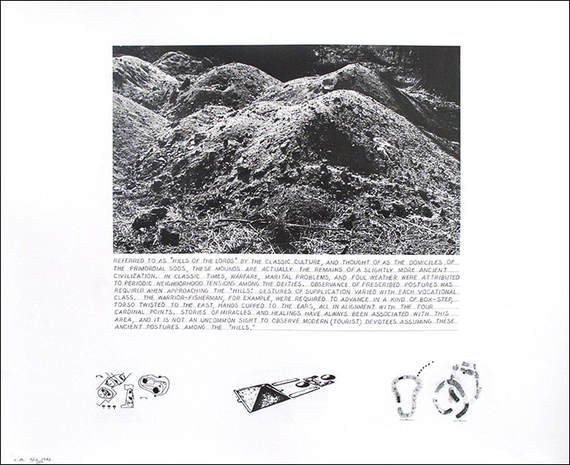 Referred to as "Hills of the Lords" by the classic culture, and thought of as the domiciles of the primordial gods, these mounds are actually the remains of a slightly more ancient civilization. In Classic times, warfare, marital problems, and foul weather were attributed to periodic neighborhood tensions among the deities. Observance of prescribed postures was required when approaching the "Hills." Gestures of supplication varied with each vocational class. The warrior-fishermen, for example, were required to advance in a kind of box-step, torso twisted to the east, hands cupped to the ears, all in alignment with the four cardinal points. Stories of miracles and healing have always been associated with this area and it is not an uncommon sight to observe modern (tourist) devotees assuming these ancient postures among the "Hills." 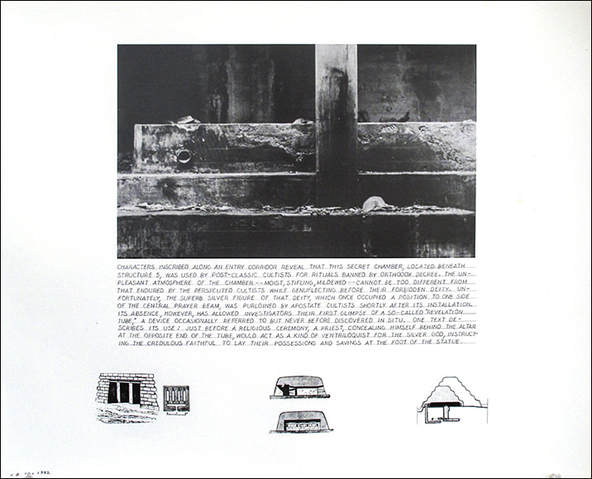 Characters inscribed along the entry corridor reveal that this secret chamber, located beneath Structure 5, was used by post-classic cultists for rituals banned by orthodox decree. The unpleasant atmosphere of the chamber—moist, stifling, mildewed—cannot be too different from that endured by the persecuted cultists while genuflecting before their forbidden deity. Unfortunately, the superb silver figure of that deity, which once occupied a position to one side of the central prayer beam, was purloined by apostate cultists shortly after its installation. Its absence, however, has allowed investigators their first glimpse of a so-called "Revelation Tube," a device occasionally referred to but never before discovered in situ. One text describes its use:  Just before a religious ceremony, a priest, concealing himself behind the altar at the opposite end of the tube, would act as a kind of ventriloquist for the silver god, instructing the credulous faithful to lay their possessions and savings at the foot of the statue. 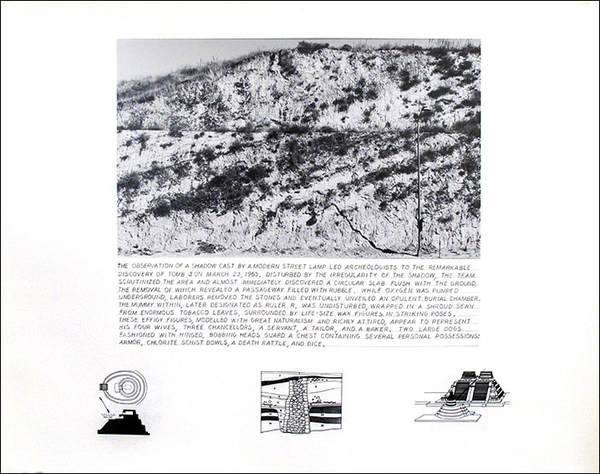 The observation of a shadow cast by a modern street lamp led archeologists to the remarkable discovery of Tomb 3 on March 23, 1965. Disturbed by the irregularity of the shadow, the team scrutinized the area and almost immediately discovered a circular iron slab, flush with the ground, the removal of which revealed a passageway filled with rubble. While oxygen was pumped underground, laborers removed the stones and eventually unveiled an opulent burial chamber. The mummy within, later designated as Ruler R, was undisturbed, wrapped in a shroud sewn from enormous tobacco leaves , and surrounded by life-size wax figures in striking poses. These effigy figures, modeled with great naturalism and richly attired, appear to represent his four wives, three chancellors, a servant, a tailor, and a baker. Two large dogs fashioned with hinged bobbing heads guard a chest containing several personal possessions: armor, chlorite schist bowls, a death rattle, and dice. 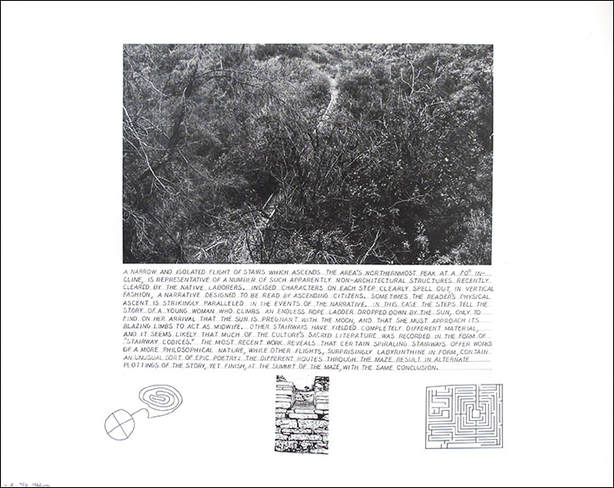 A narrow and isolated flight of stairs which ascends the area's northernmost peak at a 70 degree incline, is representative of a number of such apparently non-architectural structures recently cleared by the native laborers. Incised characters on each step clearly spell out, in vertical fashion, a narrative designed to be read by ascending citizens. Sometimes the reader's physical ascent is strikingly paralleled in the events of the narrative. In this case the steps tell the story of a young woman who climbs an endless rope ladder dropped down by the sun, only to find on her arrival that the sun is pregnant with the moon, and that she must approach its blazing limbs to act as midwife. Other stairways have yielded completely different material, and it seems likely that much of the culture's sacred literature was recorded in the form of "stairway codices". The most recent work reveals that certain spiraling stairways offer works of a more philosophical nature, while other flights, surprisingly labyrinthine in form, contain an unusual sort of epic poetry:  the different routes through the maze result in alternate plottings of the story, yet finish, at the summit of the maze, with the same conclusion.